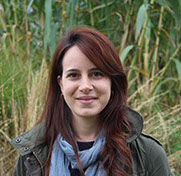 Beatriz is a Spanish biologist who graduated by the University of Alicante, Spain, specializing in Agrobiology and Botany, and currently studying the MSc Plant and Fungal Taxonomy, Biodiversity and Conservation course at The Royal Botanic Gardens, Kew and Queen Mary University of London. She is particularly interested in the taxonomical aspects of botany and mycology, and at the moment working in a research project with fungi species new to science of the genus Cortinarius. Cortinarius is one of the most diverse ectomycorrhizal genera of the Agaricales order and its species are of essential importance to the ecosystems as they have a central role in nutrient cycling. Boreal Cortinarius species are well known, however species of the Southern Hemisphere are severely understudied. Her research aims to contribute on the scientific knowledge of this former area of the Planet, by doing an extensive taxonomic and phylogenetic study of specimens from Nothofagus forests of the Argentinean Patagonia and Chile.

"Working with fungi was quite clear to me since it is a kingdom of essential importance, greatly diverse and that still needs so much work and attention to be put in."