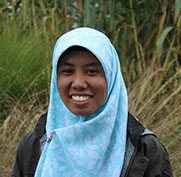 Meilinda is working on a project entitled "Understanding the Basidiomycete family: Agaricaceae." Agaricaceae is one of the most diverse families of basidiomycete fungi with a variety of morphological appearances, including the groups of agaricoid, secotioid, and gasteroid fungi. The classification of Agaricaceae has been changed over time and to date is still constantly changing. The latest classification based on the morphology and molecular studies recognised around 80 genera. In this project, Meilinda uses sequences of ITS, LSU, RPB2, and EF1-α from predominantly type species of each genus currently accepted in the family for phylogenetic reconstruction. The phylogeny of the family can be used to identify the relationship between the genera.

Meilinda graduated from the University of Mataram, Indonesia with a BSc in Biology and is now a master student at QMUL-Kew. She hopes to follow her interest in mycology into a future career.